from Pearl Mchaney: This is a red-letter day for the Eudora Welty Review as we have just confirmed a new home at the University of Pennsylvania Press!
Associate editors Sarah Gilbreath Ford (Baylor) and Rebecca Harrison (West Georgia) and I have worked toward this moment since November, when our previous managing and production editor Lori Howard took a new job at Georgia State.
Content for the Eudora Welty Review 14 2022 will be winging its way to UPenn Press later this week. And I'll alert our readers to the new websites and addresses as soon as those pieces are settled. 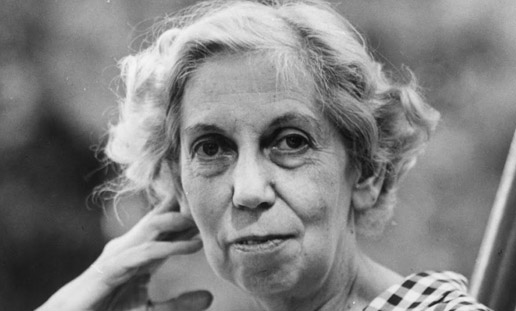 MDAH Announces the Opening of the Welty Family Letters: In honor of Eudora Welty’s 113th birthday on April 13, a previously restricted series of Welty’s family papers is now open to the public. “The letters in this series begin with the courtship letters of my grandparents,” said Welty’s niece Mary Alice White. “Also included are personal papers of the family, Eudora's correspondence with family members, and papers and letters from my father, uncles, and other family members. Because these letters were not technically the property of Eudora—they belong to the letter writer—I think Eudora wanted them sealed to respect the privacy of those still living.” The Eudora Welty Collection, Series 45: Welty Family Papers was restricted to the public, in accordance with Welty’s will, for twenty years after her death. “This rich gathering of family correspondence swells what was already a most remarkable resource,” said Welty scholar and affiliate professor at the College of Charleston Harriet Pollack. “In these new materials, we grow close to Welty’s parents; her siblings and their families; her grandmother and great grandmother and their children. Through their intimate and everyday interactions with one another, we also come to know so much more about the woman and the writer, Eudora Welty. Astonishingly, a very private woman has unpredictably made generations of personal history available to those touched by her art, inviting us to better understand and to more fully engage the elusive woman behind it.”

The Eudora Welty Collection was established in 1957, when the internationally acclaimed author donated a portion of her papers—manuscripts, photographs, and correspondence—to the Mississippi Department of Archives and History. The entire Welty Collection consists of  drafts, revised copies, and printer's versions of Welty's works, including stories, books, essays, reviews, lectures, speeches, and drama. The collection also contains incoming and outgoing correspondence of Welty, negatives and photographs taken by Welty and her father, and memorabilia. The Welty Collection, now one of the largest literary collections in the country, is used by scholars from around the world. To view a description of this collection click here. For help on how to research in the archives click here.

The Eudora Welty Society has a new listserv, housed at Baylor University. If you were on the previous listserv, you should automatically be enrolled in this new one. If you wish to join the new listserv, send an email to sarah_ford@baylor.edu.

Internationally known as a writer, Eudora Welty has as well been spotlighted as a talented photographer. The prevalent idea remains that Welty simply took snapshots before she found her true calling as a renowned fiction writer. But who was Welty as a photographer? What did she see? How and why did she photograph? And what did Welty know about modern photography? In Exposing Mississippi: Eudora Welty's Photographic Reflections, Annette Trefzer elucidates Welty’s photographic vision and answers these questions by exploring her photographic archive and writings on photography.

The photographs Welty took in the 1930s and ’40s frame her visual response to the cultural landscapes of the segregated South during the Depression. The photobook One Time, One Place, which was selected, curated, and shaped into a visual narrative by Welty herself, serves as a starting point and guide for the chapters on her spatial hermeneutic. The book is divided into sections by locations and offers how the framing of these areas reveals Welty’s radical commentary of the spaces her camera captured. There are over eighty images in Exposing Mississippi, including some never-before-seen archival photographs, and sections of the book draw on over three hundred more. The chapters on institutional, leisure, and memorial landscapes address how Welty’s photographs contribute to, reflect on, and intervene in customary visual constructions of the Depression-era South. UP Mississippi page for the book

The theme for the 2021 Faulkner and Yoknapatawpha conference was "Faulkner, Welty, and Wright: A Mississippi Confluence." The conference was held July 18-21. See here for conference website and program.

Margaret Pless, a doctoral student at the University of Mississippi, has been named the 2020 Eudora Welty Fellow. Pless will use archival holdings at the Mississippi Department of Archives and History (MDAH) to research how Eudora Welty constructed her identity in her writing.

“We're grateful to the Foundation for their continuing support and excited that Margaret Pless will make extensive use of the Welty Collection this summer,” said David Pilcher, director of the MDAH Archives and Record Services Division.

After receiving her BA in English and history from Vanderbilt University, Pless completed her MA in English at the University of Mississippi where she is currently working towards her PhD. Pless will use the $2,000 fellowship to cover travel, housing, and other expenses incurred while doing primary research at the William F. Winter Archives and History Building in Jackson.

For more information on the Eudora Welty Fellowship, see the Mississippi Department of Archives & History

David McWhirter is the winner of the 2020 Phoenix award, given by the Eudora Welty Society for distinguished achievement and outstanding contributions to Welty studies. 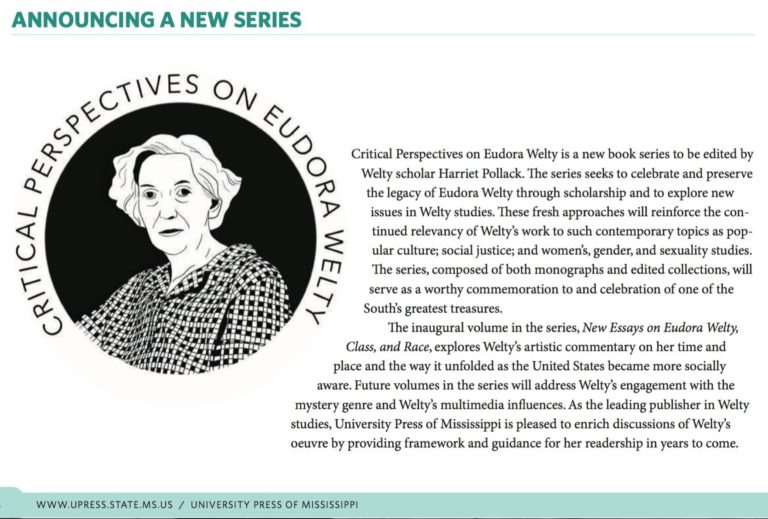 The University Press of Mississippi has a new series, Critical Perspectives on Eudora Welty, edited by Harriet Pollack. The series seeks to celebrate and preserve the legacy of Eudora Welty through scholarship and to explore new issues in Welty studies. These fresh approaches will reinforce the continued relevancy of Welty's work to such contemporary topics as popular culture; social justice; and women's, gender, and sexuality studies. The series, composed of both monographs and edited collections, will serve as a worthy commemoration to and celebration of one of the South's greatest treasures. The inaugural volume in the series, New Essays on Eudora Welty, Class, and Race, explores Welty's artistic commentary on her time and place and the way it unfolded as the United States became more socially aware. Future volumes in the series will address Welty's engagement with the mystery genre and Welty's multimedia influences. As the leading publisher in Welty studies, University Press of Mississippi is pleased to enrich discussion of Welty's oeuvre by providing framework and guidance for her readership in years to come.

Congratulations to Christin Marie Taylor, whose beautiful book Labor Pains: New Deal Fictions of Race, Work, and Sex in the South (UPM) is now out.  One fourth of the book is on Eudora Welty.

At the height of the New Deal era and its legacies, Taylor examines how southern literature of the Popular Front not only addressed the familiar stakes of race and labor but also called upon an imagined black folk to explore questions of feeling and desire. By poring over tropes of black workers across genres of southern literature in the works of George Wylie Henderson, William Attaway, Eudora Welty, and Sarah Elizabeth Wright, Taylor reveals the broad reach of black radicalism into experiments with portraying human feelings.

These writers grounded interrelationships and stoked emotions to present the social issues of their times in deeply human terms. Taylor emphasizes the multidimensional use of the sensual and the sexual, which many protest writers of the period, such as Richard Wright, avoided. She suggests Henderson and company used feeling to touch readers while also questioning and reimagining the political contexts and apparent victories of their times. In effect, these writers, some who are not considered a part of an African American protest tradition, illuminated an alternative form of protest through poignant paradigms.

CHRISTIN MARIE TAYLOR is assistant professor of English at Shenandoah University. Taylor's work has appeared in Southern Quarterly, Southern Cultures, American Literature in Transition: 1960-1970, and the Encyclopedia of Hip Hop Literature as well as Teaching the Works of Eudora Welty: Twenty-First-Century Approaches, published by University Press of Mississippi.

Richard Ford will deliver the third annual Eudora Welty lecture at the Folger Shakespeare Library in Washington D.C. on Thursday, October 9th at 7:30 p.m. He is the co-editor with Michael Kreyling of the two volumes of Welty’s complete works for the Library of America series.

Sarah Gilbreath Ford is the winner of the 2018 Phoenix award, given by the Eudora Welty Society for distinguished achievement and outstanding contributions to Welty studies.

Mae Miller Claxton and Julia Mortimer have edited a collection of essays with the University Press of Mississippi entitled Teaching the Works of Eudora Welty: Twentieth-First-Century Approaches.

Salman Rushdie gave the inaugural Eudora Welty Lecture at the Washington National Cathedral. The event was sponsored by the Eudora Welty Foundation and the PEN/Faulkner Foundation in collaboration with the Folger Shakespeare Library.

Harriet Pollack has a new book on Welty out with University of Georgia Press entitled Eudora Welty’s Fiction and Photography: The Body of the Other Woman.

Julia Eichelberger has been the named the winner of the 2016 Phoenix Award, given by the Eudora Welty Society for outstanding service to Welty studies.